Today is the deadline for the comic book 'Grenzenloos' about (the borders of) the Province of Limburg. Together with the Tekenkingz and Marco Jeurissen and Jean Gouders we will be issuing this book in November of this year, 150 years after Limburg became part of the Netherlands as a province like the others.

The 'Dodendraad' ('dead line') is also on of the topics in my second comic in 'Grenzenloos'.
This electric wire of 2000 Volt was installed along the Belgium / Dutch border by the Germans to prevent the Belgiums to flee their occupied country. Many people were killed in trying to escape.
Nothing much has changed since for people fleeing a war... 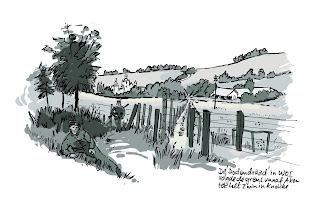 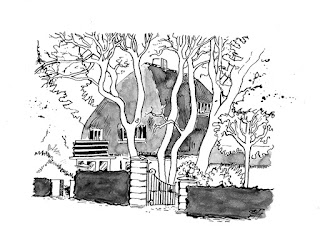 Every day I pass this house with tratched roof. As a matter of fact I happen to know the owner who is looking for a piece of art by me. This might please him. But I'm wondering... I think the drawing needs a little more shading in the background. Dilemma...
Gepost door tejohaas op maandag, juli 10, 2017 Geen opmerkingen:

A visualization of a concept for a co working art space in the city of Maastricht. Working space, meeting point, exhibition place and short stay accommodation for cultural institutions and individual artists, both professionals as amateurs. 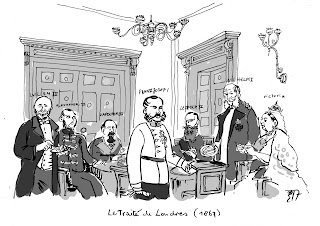